The fashion industry is city-affair concentrated in Paris Milan London and New York. The big fashion multinationals, the magazines – they all clutter together in the centers. When one of these brands, the bigger then life magazines however wants to shoot on location they oftentimes travel to nature, the seashore. A a mer.A la mer. Where people are happier. Where the sun dawns en sets. Where life is better. Healthier. Where the ocean takes away the misere du city-life.The people who live au bord De La Mer are open minded people. Often a wonderful mixture of travellers and settlers from the past. Of people having a different outlook on what is important in life. Life is an open eye for beauty. And beauty is so much more common A La Mer.People long for the sea for good reason. The sea and beauty are joined at the hip. On the beach. At the coast.The A la mer founders think it is high time for a reverse playbook an highbrow big city speedy beauty. We think that beauty has to be spotted where it blossoms.Here at the Cote d Azur. The prettiest and famous coast of the most wonderful country in the world France.And that is what we will do: open an agency with an eye for beauty called A la Mer right here at the cote d’Azur.

After studying psychology in Holland, Eric Schaub left his native country for Paris. With four fluently spoken languages in his luggage, he quickly installed himself in the industry of managing careers of talent. 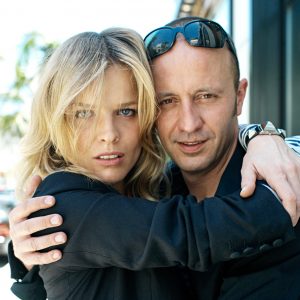 After being a casting director assistant for Rolf Scheider and organizing the first photo tests for Eva Herzigova in 1990, he was quickly hired by major model agencies to develop his skills. After working at Ford models in Paris, who opened their Paris branch in the beginning of the nineties, Eric directed and managed the booking table at Viva Models Paris from 1997 until 1999, and from 2000 until 2007 he has been directing and managing the booking table at City Models Paris.

In 2007 Next Model Management hired him and than in 2008 he took over the direction of the booking table Women Management Paris, and finally in 2015 he joined Marilyn Agency in Paris, where he directed the women’s board.